Callicoon Fine Arts is pleased to announce an exhibition of new oil paintings by Benjamin Kress, on view from November 3 to December 22, 2017. Created over the last year, the work presents the viewer with images of a mysterious recurring masked figure that is folded, deformed and transformed by light, and a series of diamonds.

In this body of work, traditional material techniques are used to delve into contemporary ideas about the fabrication of the self and its relationship to image. The paintings are slowly made, built up through layers of smoothed grounds, underpainting, and transparent glazed brushwork to create luminous surfaces. The source imagery for the paintings was developed through a multi-step process. Kress sculpted and cast a mask of an idealized, difficult-to-pin down character, an empty yet evocative hybrid face visually rooted in the vernacular of fashion imagery. Photographs of the artist wearing the mask were crafted into ephemeral paper and cellophane sculptures and rephotographed. The figures are cryptic, striking art-historical poses as they mask and unmask themselves. They are faceted and cubist, crumpled and unfolded, 2-dimensional beings occupying 3-dimensional space. In some of the paintings the figures are highly reflective, in others, the light is diffracted, breaking into color spectrums.

The figuration is counterpointed with a series of painted diamonds. Diamonds, like the figures, are objects formed through pressure, and in the visual similarity and economic disparity of diamond and cellophane throughout the exhibition, a dialogue about value emerges. Within the gallery of shimmering, dematerializing figures and diamonds, beauty and idealizations are sought after, destabilized, and distorted. The body is seen both as an image to be viewed, and as a distorted lens through which we view things; permeable, ephemeral, a mirage that can slip away without ever quite defining the soul of the matter.

In addition, on December 16, 2017, Benjamin Kress and Dia Dear will present a performance collaboration incorporating visual elements from Kress’s artwork. Dia Dear is a movement-based performance artist whose practice is influenced by their early work in the drag and performance scenes of San Francisco. Exploring crossover in the two artists interests, Dia Dear will enact a piece about masking, the body, theatricality and emotion.

Callicoon Fine Arts is located at 49 Delancey Street between Forsyth and Eldridge Streets. Gallery hours are Wednesday to Sunday, 10:30am to 6:30pm. The nearest subway stops are the B and D trains at Grand Street and the F, J, M and Z trains at Delancey-Essex Street. 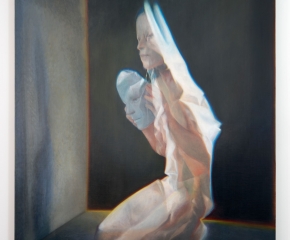 A review of Benjamin Kress: New Paintings in The Brooklyn Rail, online.

A review of Benjamin Kress: New Paintings in Art in America. (Please contact the gallery for a PDF)

A personal manifesto published in Garage via VICE, online.

Read the article on Garage here
Back To Top