Callicoon Fine Arts is very pleased to present an exhibition by Luther Price opening on Friday, June 15 with a reception from 6 to 8pm and continuing through July 27th.

The installation includes projections of handmade slides and a selection of ink on wax paper paintings, some of the materials associated with Price’s practice, ongoing since the 1980s, as an artist and filmmaker.

The slides are individual collages constructed from the detritus of his own film making: short strands of 8mm film, found footage that has been transformed by the effect of mold growth, scratching, and other techniques used by Price to radically transform the material of film. Often within the slides are small objects like insects, glitter, candy, and strands of hair, adding an amber-like time signature to the projections. Price has completed hundreds of these miniature collages over the last several years that find their final form when projected. Two such projections, along with an intensive program of film screenings, were included in the recent Whitney Biennial, the first ever public exhibition of these types of slide works. In its review of that exhibition, the New York Times calls Price “one of the Biennial’s stars.”

The glass storefront of the gallery becomes a slide with the installation of images of tumors and fibroids printed onto vellum. The representation of viscera and disease, the medical and clinical subjection of bodies, are themes that have occupied Price through much of his career. In this installation, the grid of images extends onto the walls of the gallery and will incorporate other materials that Price has lovingly saved from his film-work.

The Whitney Biennial film screenings included selections from Price’s Inkblot films. These hand painted films where made by rubbing the ink cartridges of markers directly onto found footage. He frequently scratched out areas of image and applied inks, only to go over those areas again with other colors. Placing lengths of film over wax paper sheets that became repositories for the excess color and mark making, the rubbing often tore the paper and caused multiple sheets to bond together, forming intensely colored palimpsests. Seen here for the first time these pieces, like the exhibition as a whole, revel in process and experimentation.

Luther Price studied Sculpture and Media/Performing Arts at the Massachusetts College of Art and Design where he currently teaches. In addition to the Whitney Biennial, his work is also a part of Second Nature: Abstract Photography Then and Now at the DeCordova Sculpture Park and Museum in Lincoln, MA, through April 21, 2013. Prior exhibitions, screenings and performances at galleries and museums include The Museum of Modern Art, Thread Waxing Space, PARTICIPANT INC, Light Industry, all NY, The San Francisco Cinematheque, and The Institute of Contemporary Arts, London, among other institutions.

Callicoon Fine Arts is located at 124 Forsyth Street, between Delancey and Broome Streets. The nearest subway stops are the B and D trains at Grand Street, the J and Z trains at Bowery and the F, J, M and Z trains at Delancey-Essex Street. 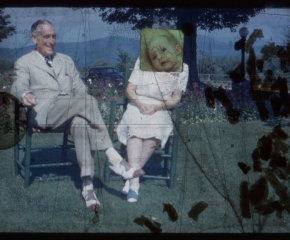 Read the article in Art in America here
Back To Top