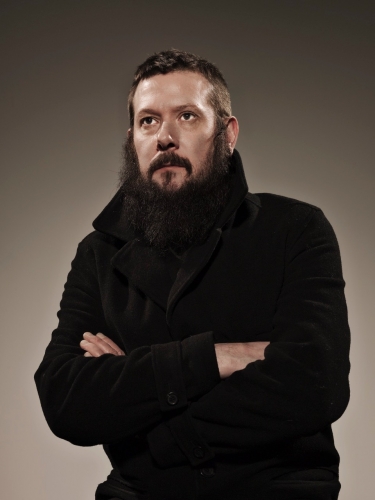 Luther Price, an experimental filmmaker and performance artist known for his radical contributions to underground queer cinema, died on Saturday, June 13th, in Revere, Massachusetts, at the age of 58.

Price, who kept his birthname to himself, was born in Marlborough, Massachusetts, in 1962. He studied sculpture at the Massachusetts College of Art and Design, but after suffering a near-fatal gunshot wound during his semester abroad was no longer able to create large sculptural installations. He transitioned to filmmaking and adopted a persona named Tom Rhoads. Rhoads was one of several pseudonyms that Price used throughout this artistic life, having already moved through several aliases while in college, each of which he assumed to create specific works. His transformations opened the gates for new phases in his career, in which both the artist and his art were reborn.

Price’s Super 8 films produced in the 1980s and 90s brought him underground fame. His vivid, chemically altered reels were unique objects that pushed the bounds of the medium. Using techniques such as editing and montage, he crafted charged psychodramas that worked through the complexities of sexuality, violence, and family. Through the persona of Rhoads, who was the physical embodiment of the artist's childhood self, Price created visceral, nightmarish films rooted in childhood memory and trauma. And, like the scars of early trauma, Price’s films made an indelible impact on viewers.

Price is best known for Sodom (1989–94), an AIDS-era Super 8 film crafted of gay pornography and Biblical footage. Price’s friend Ed Halter wrote of the film: “It is a vision of hell crafted from old gay porn, cheap color films faded into a sickly shitlike yellow-green-brown, with faces of men jittering inside hold-punched haloes, evoking at once ecstasy and torment.” Underground film programmers, who expected positive portrayals of queer life to counter America’s dehumanization of gays, were stunned by Sodom and its deep ambiguity. LGBT film festivals rejected the film and most critics met it with strong opposition. For the artist, too, it was an overwhelming project, which prompted him to leave the character Rhoads behind and assume the new persona of Luther Price ("Luther" after Martin Luther King, Jr. and "Price" for Vincent—a moniker which epitomized the conflict of good and evil).

Price began to experiment with performance-based, live cinema in the mid-1990s, after two of his films were rejected by a printing lab due to their pornographic content. His live cinema, which included the Clown series (1992–94) and Meat (1992–99), took place as films accompanied by performative events. The events occurred at several galleries in San Francisco and at the New York Underground Film Festival.

In the late 1990s, Price shifted to working with pre-existing 16mm footage and finished over 100 films. He developed a passion for “ink blotting,” made by scrapping off emulsion from films and then applying layers of color with inks and markers. He paired the spliced imagery of these works with brutal electromechanical noise generated by the churning sprockets of the projector’s audio system. During this time, Price survived the deaths of his mother, father, and sister—personal losses which contributed to difficult, harrowing works which seemingly embraced their own death drive. During this time, he inherited a property from his mother in Revere, Massachusetts, which became his home studio.

Keeping the name of Price, the artist transitioned into a new phase of his career in the early 2000s. While continuing to make films, he also experimented with hand-crafting individual slides for projection. The slides maintained formal and thematic ties to his films—exploring violence, decay, fantasy, and corporeality. Each slide is a beautiful, visceral, unique object. Pressed between the two glass slide plates, his slides incorporate stills from salvaged health clinic films, close-ups of surgical procedures, and unprocessed film, layered with various materials such as dust, his own skin, surgical thread, and ants. These composite, corporeal works reflected Price’s almost scientific fascination with the fallible human body, an interest which dated back to his earlier gunshot wound. For Price, the slides also signified a return to sculpture. He remarked that they “feel like film, but they also feel like painting, and they also feel like sculpture. They fill a space in a different way. The slides have allowed me to rethink things, set myself into a new pattern of working, in a whole other format that is still projection, is still light.”

His handmade slide carousels premiered at the 2012 Whitney Biennial, which subsequently garnered the attention of a wider audience. Retrospectives of his work were held at several galleries, including Participant Inc. and Callicoon Fine Arts, in New York; the Carpenter Center for Visual Arts, in Cambridge, MA; and Mana Contemporary, in Chicago, IL. His restored films have been screened at the Chicago Underground Film Festival in Chicago; Kunstverein in Hamburg, Germany; the Walker Art Center in Minneapolis, MN; The Kitchen in New York, NY; the Wexner Center for the Arts in Columbus, OH; the Hammer Museum in Los Angeles, CA; and the Museum of Modern Art (MoMA) in New York, NY, among many other venues. His recently restored work is in the collection of Anthology Film Archive, New York.

Price lived and worked in Revere, Massachusetts until his death.